The Causes of Flooding in Paper Dryers

The majority of flooding incidents can be attributed to steam and condensate system issues (poor equipment sizing, incorrect system set-points and incorrect system calibration) and mechanical issues (unreliable or incorrectly installed steam joints and syphons).  In this discussion, we will focus on the steam system issues that contribute to flooding.

1. Incorrect differential pressure (dP) indication. This is the most common problem encountered when troubleshooting flooding issues. If the indicated dP is higher than the measured dP, flooding will occur even though the dP appears to be adequate. Unreliable dP measurements can result from the following:

2.  Low differential pressure (dP) Most steam system problems can be attributed to low differential pressure (dP) being applied to the syphon. If the normal dryer operating dP is set and controlled to a value that is too low to handle, the current operating speed, steam pressure, and condensing load will tend to load up with condensate in the dryer. The true syphon dP is obtained by measuring the pressure difference between tapping points that are located as close to the rotary joint steam inlet and condensate outlet as possible. In most paper mills, the dryer section dP is normally measured between the steam header and condensate header. However, the piping also contributes to the measured dP.  Therefore the steam section dP must always be set higher than the recommended minimum syphon dP to accommodate the included piping dP. 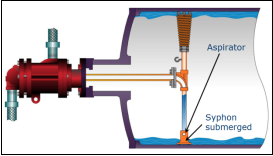 3.   Operating rotary syphons below the flood recovery dP A temporary loss of dP on a rotary syphon operating at high speeds will result in the syphon shoe being covered with condensate. Once the dP is restored (if it is not above the flood-recovery dP for the speed under consideration) the condensate flow will not be restored, leading to flooding. If not already present, drilling an aspirator hole into the syphon vertical leg will significantly reduce the flood-recovery dP and help to avoid flooding.  Aspirator holes should be drilled into all rotary syphons that operate at speeds above 600 m/min.

5. Incorrectly sized thermocompressor. Thermocompressors have one optimum operating point. However, in the steam system they must operate over the full pressure and steam flow range of the steam group.