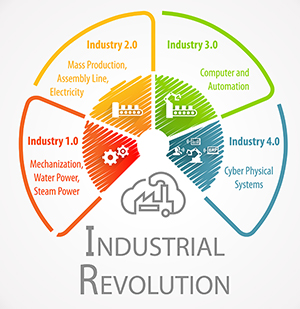 The fourth industrial revolution, or Industry 4.0, is the continued development of technologies such as artificial intelligence, genome editing, augmented reality, robotics, and 3-D printing. The forefront of Industry 4.0 is smart manufacturing in the evolution of process manufacturing, logistics, and supply chain.

The four categories of technologies providing the methods and guidance of Industry 4.0 are cyber-physical systems (CPS), Internet of Things (IoT), cloud computing, and cognitive computing (AI).

Cyber-physical systems are the key infrastructure supporting the development of smart manufacturing. Cyber-physical systems integrate cyber capabilities with physical capabilities to solve problems that separately neither could solve. Cyber capabilities relate to computation, communication, and control while the physical elements are about motion and other physical processes. Examples of this are cars, aircraft, and robots as they move physically, but the movement is determined by computerized control algorithms that adjust actuators such as brakes.

IoT is the interconnection of networked computing devices embedded in everyday objects, enabling them to send and receive data. Cars, appliances, thermostats, and health monitors are examples of devices that can be connected remotely through IoT. Business Insider Intelligence expects there will be more than 24 billion IoT devices in use by 2020.

Cloud computing is using computing as a service rather than a product. Companies have built data centers where computing software can be provided remotely on a large scale and rented out, like a utility service. An example of this software is the iCloud information storage offered by Apple which syncs your personal devices. In the future, cloud computing will allow software to be delivered and used through the internet instead of desktop apps.

The fourth industrial revolution is here and Kadant is embracing the new technologies. The next article in this series will highlight how Kadant has integrated Industry 4.0 into its products for the paper and pulp market.