The Impact of Codes and Standards

Throughout the late 19th and early 20th centuries, ruptures in pressure vessels occurred at a rate of nearly 1 every 4 days, resulting in the death of thousands. The industrial revolution brought rise to harnessing steam to power thousands of boilers in industrial machinery, locomotives, and steam boats. Today, the frequency of these catastrophes has gone down significantly as a result of the development of codes and standards over the past 150 years. Over the years, the understanding of vessel design, materials, testing, and inspection have drastically increased. The implementation of codes and standards has reduced the number of failures to virtually none as shown in Figure 1.

In Europe, the Pressure Equipment Directive (PED) is enforced through the European Union (EU). Similarly, products sold throughout the provinces and territories in Canada are assigned Canadian Registration Numbers (CRN) to ensure safe operation of pressure equipment. Kadant Johnson conforms to ASME B31.1 Power Piping, which is recognized for both PED and CRN applications. 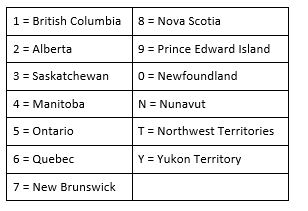 A Canadian Registration Number (CRN) is a designation assigned by a provincial regulatory authority, that allows a pressure vessel, fitting, or piping to be used in the province or territory in which the equipment is registered. Each province/territory is represented by a numeric digit or letter following the decimal point within the CRN as shown to the right. The first digit after the decimal point specifies the province which was first registered. Subsequent provinces that register the design are added in the order of registration. For example, the CRN for a rotary joint line is as follows: 0H18445.519870264. As indicated by the digits after the decimal point, this design was first registered in Ontario (5), followed by British Columbia (1) and so on.

Both the PED and CRNs are used to ensure the safe design of pressure equipment. However, there are significant differences between the two. For CRNs, the manufacturer of the pressure equipment is required to register separately in each province/territory if they wish to sell their product throughout all of Canada. While a design which has been PED approved is permitted to be sold in each member state of the EU. PED also has more stringent requirements in terms of material traceability and welder qualifications relative to the CRN. Additionally, PED requires the manufacturer of the pressure equipment have an authorized inspector who performs a conformity assessment on the equipment.

Kadant Johnson effectively utilizes PED and CRN registrations and markings for all its rotary joints and steam specialty products, when applicable.